For as long as I can remember, I have been fascinated by technology. At school I was the first to get a programmable calculator in the form of a Texas TI with a whopping 50 odd steps. This was quickly followed one that had a clock and alarm built in. Amazing stuff. But then it happened. Wandering home from school one day, I glanced in the window of a shop that sold office supplies. There, in the window, sat the future. An 8K PET.

The next day I told my friend and in our lunch hour we ran down to the shop and gawped at it. My friend then pulled out a battered looking ETI magazine and announced that 8K meant it could store 8 thousand characters of information. Eight thousand! This was to me a staggering amount of information. Alas, it cost about £600 and I earned £1 a week pocket money so the future for me wasn’t quite there yet.

Fast forward a few years, I had left school, started working for a bank and begun earning big money. Well, sort of, compared to pocket money. It also provided me with the chance to get a cheap bank loan. The next few weeks consisted of trip after trip to WH Smith, scanning the few computer magazines that existed until I had narrowed down the choice.

The Sinclair ZX80 was just being replaced by the ZX81 but whilst cheap, it wasn’t good enough for me as I had already been spoiled. In the previous few months, I had been hanging out at a CB club and made friends with one Apple Pie (don’t you just love those CB handles?). Apple Pie, naturally, had an Apple II (and, surprisingly, a girlfriend). The Apple II became my specification benchmark. Whatever I bought had to have colour and sound. 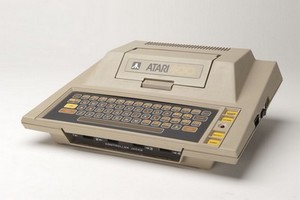 Thus, the shortlist shrank down to an Apple II, a DAI (an oddball Belgian micro as I remember) and an Atari 400 (the 800 was right out the question, price wise). The decision was helped by the local proximity of Maplin Electronics. I arrived and was met by a number of Atari 400 and 800 machines, 810 disk drives, cassette decks, piles of software and one Atari obsessed young Saturday boy. He showed me a few games that after being raised on the Atari VCS and its somewhat limited graphics, totally blew me away. A great many Atari computers at that time were sold on the back of the game Star Raiders much as BBCs would be sold as a way to play Elite some years later. For me though, the moment of truth was Jawbreaker. This classy Pacman clone had transparent ghosts. Graphics didn’t get any better than that. Decision made. Bank loan arranged, purchase completed.

It’s difficult to appreciate in hindsight just how expensive computers were back then compared to an average wage. I bought an upgraded 32K Atari 400, a 410 cassette deck, one game (Voodoo Castle, a Scott Adams text adventure) and thus spent almost 4 months wages in one exhilarating hit.

Back home, the Atari was reverentially plugged in, powered up and gawped up as a white text on blue screen came up with the word ‘READY’. And I was, ready for the future. This was a computer. It could do anything.

I started to load the game. After almost 20 minutes of burbling and screeching, the message ‘BOOT ERROR’ appeared. A second go worked though and I was launched in to gaming heaven. Not only was I immersed in my first text adventure, it even had a modified character set to look like ye olde writing. As the game unfolded I found my self starting to get nervous after typing each command in fear of something horrible happening. Such was the power of the text adventure and a fired up teenagers mind.

The next day I decided to see if I could write my own games so I booted to Basic and started tapping away. An hour or so later I had come to the conclusion one needed to know a bit about computers as everything I typed just got echoed back to me preceded by the friendly message ‘ERROR’. One quick phone call and my ETI magazine owning friend turned up. He now had experience of computers from collage. With an almost Roger Moore like knowing expression he cryptically advised ‘you program them using peek and poke’. He then started to type in various poke commands. Most did nothing although a couple crashed the Atari. The fact that they even crashed it struck me as ultimate wisdom. This man was a God. I had to learn the things he knew.

The following week I picked up the very first issue of Computer and Video Games magazine and a book on Atari Basic. Over the next few weeks I read the book and typed in the Atari game called Trench from C&VG. Needless to say, my typing was less than perfect and it took several days before I could get the game working but it had taught me a lot. Every time I ran it and something went wrong, I scoured the printout in the magazine to see where my typing differed. When a new typo was found, I realised that line of code must be related to what was happening on screen. The fact that I was even able to make a game appear on the screen by typing in commands myself and then have colours, sounds and a game was an awesome thing to behold. As each new issue of C&VG came out, another listing was duly typed in, debugged and as a result, my skills improved.

In the meanwhile, I had been making regular trips to Maplins. The Saturday boy was still there along with an increasingly tempting array of goodies. The boy himself was usually engrossed in writing his own software using the Macro Assembler. To see a mortal produce colours and movement on the screen using such low level and arcane methods whetted my appetite. It was one thing for the gurus at Atari to write games this way but for a kid in a shop in Essex? I bought the Assembler/Editor cartridge and a 6502 programming book and rushed home.

I always had a soft spot for the Assembler/Editor manual. On page one it proudly proclaimed that it had been extensively proof read and that if any example programs didn’t work, it was the reader’s fault, not Atari’s. The fact that two listings actually had the word ‘ERROR’ on some lines, indicating a syntax error was to me quite amusing.

After a few false starts I was soon using a mixture of Basic and assembler to put together games and utilities. I also started picking up the American magazines Analog and Antic which specialised in Atari computers. Apart from the copious and useful listings, they had reviews of stuff not yet available in the UK. Speech synthesizers, databases, digitising tablets, new programming languages and more left me envious as did the prices Stateside.

It was around this time I joined the big boys and bought a floppy disk drive. The Atari 810 held a massive 88k and cost a mere £350. Just two months salary by then. It revolutionised things. Suddenly games loaded in fifteen seconds, not twenty minutes. My programs could save data to random access files. I could also start to buy the more sophisticated software that only came on floppy disk. As most of these needed 48K, I had the Atari 400 upgraded. For ‘just’ £100, Maplins took the old 32K card and replaced it with a 48K one. Now I could play the state of the art games such as Choplifter.

The 810 also allowed me to start working on my dream project of writing a set of software tools for my then favourite RPG game, Traveller. The character generator I wrote in Atari Basic only just fitted in the available memory and used every RAM saving trick in the Atari book. One of my favourite tweaks was using variables for common numbers. Atari Basic used less memory to store a reference to a variable than a number so if any number was used more than a handful of times, it made sense, to replace it with a variable. The result was less room needed and line after line of code like:

By then, the first stage of my computing life was starting to come to a close. Within the year my Atari 400 was replaced first by an Atari 800 from well known dodgy local emporium Scientific & Technical as they were being phased out and could be picked up cheaply, and then shortly after by an Atari 130XE (128k of RAM) and a 1050 disk drive. The 1050 was quickly enhanced by an internal board that sped up disk reading and writing, increased capacity and copied protected games.

Since then I have owned an Atari 520STM (The Traveller program got ported to STOS), an Atari Ste (4 megabytes!), a Mega Ste (a hard drive!) and finally an Atari Falcon before succumbing to the PC and the world of Windows. My first PC was a 486SX multimedia unit with 4 megabytes of RAM, a 120Mb hard drive and all the trimmings. The Traveller program got ported to Visual Basic 4.

I’m currently typing this on something somewhat quicker with enough peripherals hanging off it to do pretty much anything. The Traveller program is midway through being ported to C#.

I still miss my 32K Atari 400 and that READY prompt though.

1 thought on “In the Beginning – Atari Memories”